On my way home from Massachusetts yesterday, I listened to an episode of NPR’s Invisibilia called Our Computers, Ourselves, which dealt with the evolving relationship between humans and computers. The whole episode is well worth a listen, but I was particularly intrigued by the story of Thad Starner, who, as a student at MIT in the early 1990s, developed a form of wearable technology, called Lizzie:

SPIEGEL: Twenty-one years ago, in 1993, Thad took this box, which houses a computer hard drive, and strapped it to his body with a whole bunch of other hardware. He had a three-pound battery…

STARNER: Lead-acid battery about the size of a motorcycle battery.

STARNER: I plugged that into a car phone.

SPIEGEL: There was a small, one-handed keyboard called a Twiddler. It has, like, a handful of keys that are played kind of like chords on a piano so that words can be typed really, really fast.

SPIEGEL: Finally, Thad had a computer screen for just one eye that he jerry-rigged to some safety goggles. It was black and originally covered all of his left eye – making him look kind of like a 21st-century pirate with a large mechanical patch. 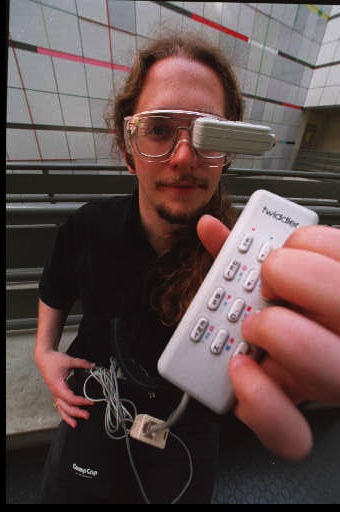 What was Thad’s motivation?

I was learning trigonometry. And I went to my father – he was a power engineer – and said hey, can you help me with this homework? My father looked at it for a few minutes and said nope, I can’t. I really don’t remember it. Hold it – you’re telling me that you knew this stuff at one point, but you forgot it? So I resolved right then and there that I was going to find a way not to forget my lessons. I found that that idea that I could gain understanding of something and then forget it was intolerable to me. It was just a sense of loss – it’s like losing a chunk of yourself.

As a Google Glass Explorer, I was particularly interested in how his professors and classmates felt about Lizzie, and about this type of technology in general. This anecdote seems like it could be found in the headlines of today:

SPIEGEL: So we talked about the anecdote – how Thad, after years of wearing Lizzie, had showed up at his PhD qualifying orals with Lizzy on him as she always was – how, as the panel of professors quizzed him, she had been there in his eye the whole time, gently guiding him, cuing his memories, which, at the end of the exam, had prompted a debate among his examiners. Was it fair to give Thad alone a PhD when he had Lizzy there helping him?

STARNER: It was a half-hour flame-fest. And I almost got a PhD that said, the faculty of MIT hereby convey upon Thad Starner and his wearable computer the degree of doctor of philosophy (laughter).

Definitely give this a listen. I’ve been thinking a lot about devices, connectedness, and personhood this summer, and will be trying to work through my incoherent thoughts over the next few weeks and months.